McDonalds Survey: The article analyzes the reason behind the conduction of the McDonald’s Customer Satisfaction Survey. It highlights the reasons behind the conduction of this survey and why it primarily focuses on American customers of the restaurant. It also provides recommendations regarding various issues faced by the company. It also highlights the importance of customer satisfaction in the business world and particularly focuses on customer satisfaction at McDonald’s. It examines the survey questions and also mentions the objectives and instructions provide for the survey.

Founded in 1940, by Richard and Maurice McDonald, McDonald’s is one of the largest chains of fast food restaurants in the world, serving more than 68 million customers on a daily basis. In 1955 the McDonald’s franchise was purchased for $2.7 million by Ray Kroc. Kroc’s entry was one of the most significant events in McDonald’s history because it paved the path for its success. By 1965 they were more than 700 McDonald’s throughout the U.S. Kroc expanded the franchise worldwide. 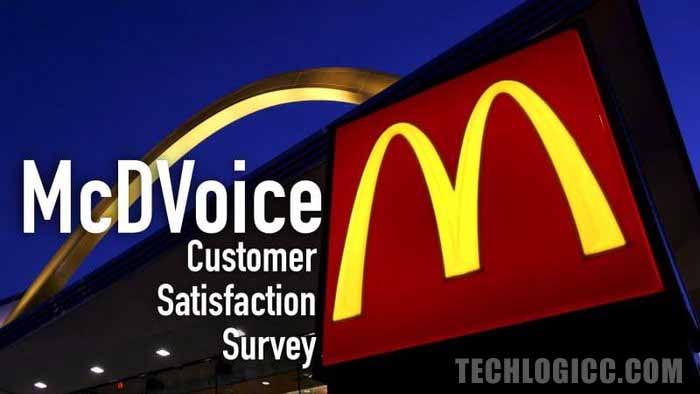 The article tends to analyze the reasons behind the conduction of the customer service survey by McDonald’s. The main focus of the article is the customers of McDonald’s in the U.S. The reason behind that is twofold: firstly, McDonald’s is originally an American brand and according to the Economist it “stands as American Capitalism’s greatest success story”. Secondly, ACSI (American Customer Satisfaction Index) has repeatedly ranked McDonald’s the lowest in satisfying its customers. ACSI is a national economic indicator of customer evaluation. It uses data by interviewing, approximately, 70,000 customers, annually. Since 1955, McDonald’s has remained lowest on the index.

In the developed world fast food business is one of the most common businesses because it delivers food quickly than any other restaurant system and also it requires less time to prepare food for the customer (Khan). A customer plays the most important role in the success of a business. Customer Satisfaction is the most important aspect of the fast food business, especially in this highly globalized and competitive age. The level of satisfaction of the customer indicates the success of a particular business in the future. Customer Satisfaction is defined by Tse and Wilton in 1988 as “evaluation of the perceived discrepancy between prior expectations and the actual performance of the product”. Customer’s satisfaction with a product or a company’s performance is the most significant factor leading towards its success. According to Gilbert, “ in today’s ever-increasing globalization of services and brands, and services-oriented businesses, such as fast-food industry need to attend to the satisfaction of their customers”. Customer satisfaction is becoming a significant issue in the fast food business because it is an important index of assessing the managerial performance of a company.

McDonald’s is one of the world’s largest fast-food chain in the world, serving approximately 68 million people in 120 countries across the world, with 1.7 million worldwide employees and 36,900 outlets, according to Wikipedia. The company has been using different techniques to provide services to customers. Despite being the largest fast food chain McDonald’s, according to the ACSI data is at the lowest position in comparison to its competitors in the U.S. and internationally as well.

Despite being lowest on the index, McDonald’s still holds a prominent position in people’s perceptions. According to 2016’s ACSI score, “the United States is still McDonald’s biggest market with 8.25 billion U.S. dollars in revenue in 2016. In 2016, about 36.9 thousand McDonald’s restaurants were in operation worldwide, of which 14,146 were located in the United States. According to Scarborough Research, more than 106 million people had visited McDonald’s in the United States within the last 30 days (Spring 2016). The McDonald’s brand is amongst the most valuable brands in the world, valuations vary however depending on the source. Milward Brown Optimor ranks McDonald’s as the most valuable fast food brand in 2016 with a brand value of approximately 88.65 billion U.S. dollars. Brand Directory ranked McDonald’s 16th with a brand value of 38.97 billion U.S. dollars in its 2017 Global 500 ranking” (The Statistics Portal).

Although McDonald’s is making efforts to save the business, it has repeatedly proved to be insufficient. Steve Easterbrook, the chief executive of the company, in one of his interviews mentioned the following weaknesses as the reasons behind McDonald’s declining image.

According to Easterbrook, “Customers are demanding great taste, high-quality food”. He further said, “McDonald’s needs to make changes in its core menu to meet the customers’ demand”. Being one of the biggest food brands McDonald’s has always been in debates regarding the quality of its food. In this competitive age, people are becoming conscious of their physicality which is in direct relation to the success of the food industry. As a step in this direction, McDonald’s has pledged to remove some ingredients from its chicken.

The corporate structure of McDonald’s is overstuffed and burdened. The company plans to remove away layers of management to reorganize procedures. Easterbrook says: “Our existing organization is inefficient and lacks clear accountability. We need to execute fewer things better.” It is of utmost importance to simplify the system of management to enhance the performance of the company.

The lengthy menu of McDonald’s is slowing down its service. Dhavale, a researcher, maintains that “ McDonald’s thinks according to the customers’ tastes, value system, lifestyle, language, perception.” This reflects its commitment to its customers. According to the Wall Street Journal, “ McDonald’s menu has grown 42.4% in the past 7 years from 85 items in 2007 to 121 items today.” So it can be said that some of the innovations are not working for McDonald’s the increase in the menu has slowed down its performance. The need of the hour is to make an effective strategy with all its consequences in mind.

Through the course of these years, McDonald’s has lost control of its brand’s message. The excitement and enthusiasm attached to it have been withering away for quite a long time now. The company needs to bring the excitement back to it, by connecting with more customers digitally and by increasing the transparency concerning the quality of its food. Easterbrook says, “ One thing we can do is make available the facts as they are today. So people make judgments based on reality instead of misconceptions.”

Keeping in view the aforementioned weakness in the also to strengthen its relationship with its customers, McDonald’s has started conducting customer satisfaction surveys. McDonald’s Customer Satisfaction Survey, powered by Service Management Group, is meant to measure customers’ approval or disapproval of the company’s products and customer service.

The survey begins with filling the information from the receipt on an online form. Upon the completion of this survey, the person will be given a validation code that can be used to redeem the offer printed on his/her receipt. The very first question of the survey asks the most important question: “Overall satisfaction with your experience at McDonald’s”. This reveals the basic reason behind conducting the survey i.e., the percentage of customer satisfaction with the restaurant. Then it further asks about the problems, if any, one encountered during his/her visit and if yes, it further inquires about the staff’s reaction to the customer’s problem. Then it asks the customer to give five reasons why he/she was not “highly satisfied”. The target of the survey is to make improvements in the management of the restaurant so that people will be highly satisfied with it. It also inquires about the visit to McDonald’s. Then it makes a comparison with its competitors. In the end, it asks for demographic information (optional) such as gender, age, children, etc.

The following information is provided by the guest satisfaction survey regarding how to fill the survey. It requires the person to:

The analysis conducted in this article highlights the reasons behind McDonald’s decision to conduct a customer satisfaction survey on its American Customers. The analysis also highlights the reason why only American Customers are chosen for this purpose. It also talks about the foundation of McDonald’s in the 1940s and how it became the biggest fast food brand of today. The analysis also mentions the ACSI 2016 report along with the weakness in the company that is responsible for McDonald’s consistent decline in the food business. Then it analyses the survey itself along with its objectives and the instructions provided at Guestsatisfactionsurvey.com. The article targets the American audience because McDonald’s is an American brand and its decline affects America the most. McDonald’s is the greatest success story of American Capitalism and that is why if it declines it impacts American customers the most. McDonald’s has more than 14,146 branches in the United States.